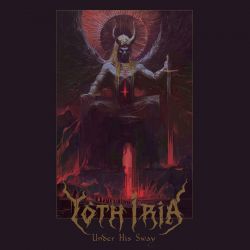 The Greek sound is mighty as always!

The Greek Black Metal acts of the late 80s and the 90s were probably the only scenes that didn't copy any of the usual stereotypes within the Scandinavian Black Metal scenes. There should definitely be a genre specifically for the Greek acts! They sound so different than anyone else that you can't really put them within any list other than their own movement!

Who can forget the legendary Rotting Christ? Or NecromantiA r Varathron? Well, if you remember those legends, I have some good news! An old member of Necromantia teamed up with another musician who was the bassist for both Rotting Christ and Varathron! (and might I add, on their best albums!)

The second song is probably the best song here. It's a bit more doomy than the title track, but it still conveys that 90s Rotting Christ feeling. It almost feels eastern and epic in a very different way!

The last song is another nice touch. Most cover songs suck, but this one is quite interesting. The original song is unknown to most since it was only released on a limited edition EP in the 90s, and as a bonus track on the first full-length Rotting Christ album. I must say it's one of my all time favourite Rotting Christ songs, and thankfully it hasn't been ruined by this band! It's still magical!

Overall, this is a very exciting band. We needed more from the glory days of Greek Black Metal, and I think we might have great days ahead of us!

9 Comments
for 'Yoth Iria - Under His Sway'

Highly recommended for all Dissection,King Diamond and Bathory fans but still so heavy,epic and doom!

His majesty at the swamp. Jim Mutilator is back to claim his black metal throne.

Unfortunately one of my top BM bands, Necromantia , has stopped because of Baron's Death
But Yoth Iria is like a phoenix rises from the ashes
a Band consist of members from top Greek Bands
I am looking forward to listening to their album

Leave a comment
for 'Yoth Iria - Under His Sway'

Leave a comment
for 'Yoth Iria - Under His Sway'